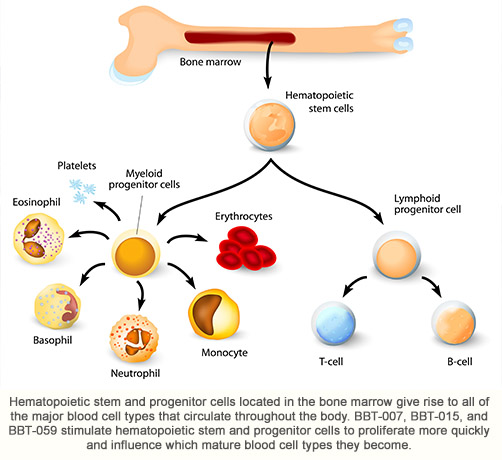 Acute, high dose radiation exposure causes a well characterized set of radiation dose-dependent and time-dependent organ malfunctions that can lead to severe morbidity and death (referred to as Acute Radiation Syndrome or ARS). Bone marrow, which is where most blood cells are produced, is one of the most radiation sensitive tissues, and patients exposed to high dose radiation typically develop severe neutropenia, anemia, thrombocytopenia and lymphopenia within 2-3 weeks of exposure. Many patients die as a result of their body’s inability to fight infections (due to lack of neutrophils) or control bleeding (due to lack of platelets). BBT-015 (G-CSF analog), BBT-059 (IL-11 analog) and BBT-007 (GM-CSF analog) are being investigated as potential treatments for ARS due to their ability to accelerate blood cell recovery and increase survival in animal ARS models. Products to treat ARS will be developed following the Food and Drug Administration’s “Animal Rule” approval pathway since it is not ethical to test these drugs in humans. Products that receive Food and Drug Administration approval for treating ARS may be purchased by the U.S. government for inclusion in the Strategic Nuclear Stockpile for use in case of a radiological/nuclear emergency.